Apple Cider Shandy is an autumn cocktail that tastes like apple pie in a glass. October for us means playoff baseball. Jackie and I are huge baseball fans, and there is nothing better than watching the best teams duke it out in the crisp autumn air. Beer and baseball go hand in hand, and this season we decided to take our cocktail game up a notch by tapping into the flavors of all-American apple pie. With my favorite team, the Indians, competing for the pennant, Jackie and I have made a point to go out to catch a few games. My always curious girl has developed a liking for the pumpkin beers that are lining the taps these days. Even though it is not my cup of tea, I picked up a six-pack of Leinenkugel’s Pumpkin Beer as a treat for her on my way home the other day. While I watched her enjoying this seasonal beer, my mind kept wandering back to our Iceberg Margarita that we created this summer. Why couldn’t I create a fall cocktail based on the same idea: beer mixed with sweet flavor? The Apple Cider Shandy was taking shape. I picked up some fresh local apple cider and some dark rum. Adding these ingredients to the pumpkin beer gave it that special “fizz” that I was looking for. We both tried it and liked it, but I knew it was missing something. So I kept working, trying again and again, tweaking this and adding that. By the time the six-pack was gone, I had finally perfected this cocktail. I added fresh OJ, apples, and ground cinnamon to give it that familiar mulled cider flavor. It tastes like chilled apple pie in a glass, and it goes down a little too easily. Make sure to dice the apples very finely because the crunch and sweetness finishes this drink off perfectly. We may have to stock up on seasonal pumpkin beer so that we can enjoy this Apple Cider Shandy well into the winter. And I think I am going to have to come up with a winter cocktail to replace it eventually. Stay tuned.

Check out some of our other favorite seasonal cocktails: Spiced Apple Cider Sangria, Spiked Iced Tea 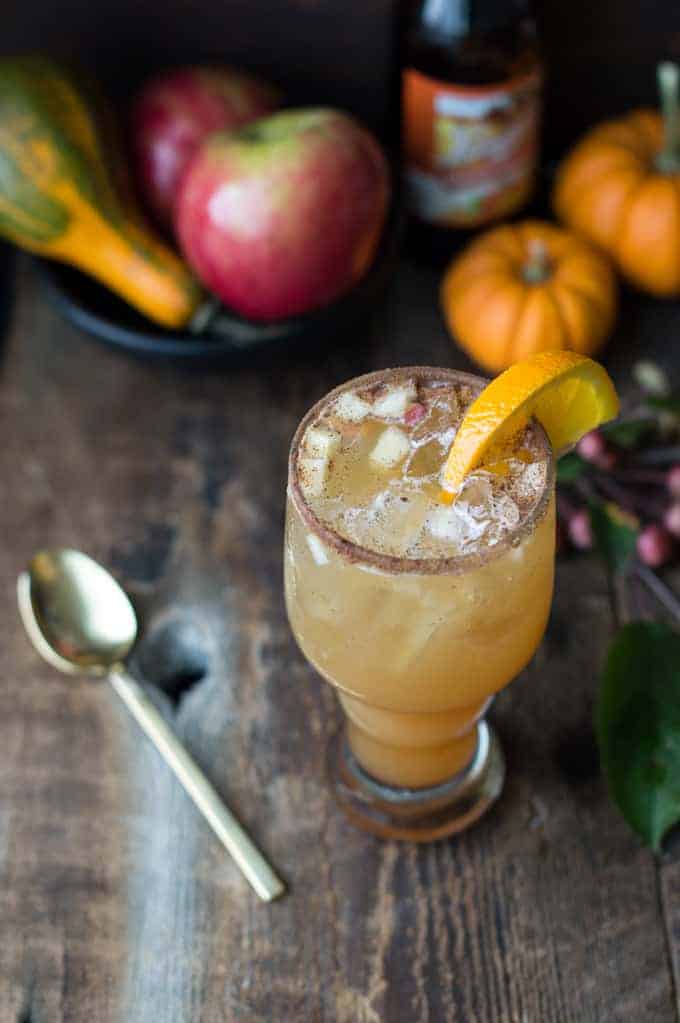