I’ve been digging in the dirt a fair amount this summer; I find it quite cathartic. I never knew I had this passion until I met Keith and we planted our first garden three years ago. Each year we become a bit wiser, and our harvest is a bit better. This year, that meant smaller and more focused planting: four tomato plants (instead of eight), three kinds of peppers (instead of four), you get the idea. Despite the fact that I wish I spent more time in the garden, I would count this year as a success, in particular because of a new addition for 2017: potatoes. Last weekend, as I sat pulling weeds and proudly picking the last of the tomatoes, out came my super man with a large metal shovel in hand. I watched with delight as he broke ground right next to me and began to pull out the most beautiful red potatoes, one right after the other. I could not believe my eyes! I had honestly forgotten that he had even planted those sweet gems, in an unassuming place on the edge of the garden. But how could I have? My potato-loving man had made a mission of growing his beloved starchy vegetable, and he had succeeded! For the first time ever, we have enjoyed Keith’s favorite food straight from the plants that we grew ourselves! It’s oddly rewarding. In celebration of our 2017 garden, Keith created the Ultimate Veggie Pizza, loaded with ingredients that we grew (with a special nod to the red potatoes). Sitting somewhere between pizza and flatbread, the Ultimate Veggie Slice consists of a homemade thin crust, flavored with olive oil, garlic, and fresh herbs, topped with colorful veggies and fresh mozzarella. It is light, earthy, and packed with flavor. As I pack my garden tools away for another year, I am grateful for the things universe has given me: fruits of the earth and the love of a great man (just to name a few). A garden fresh pizza made with roasted vegetables and a light olive oil and herb base. 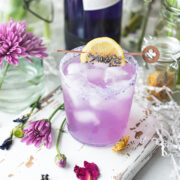 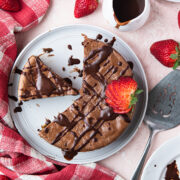 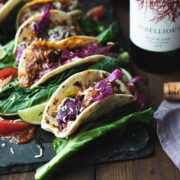