I have been singing the praises of Mexican grilled corn on the cob (elote) to Keith since the day we met.  I couldn't believe he had never tried it.  Even in the midwest, we had not come up with the simple idea of cheese on corn.  It is pure genius.  In the time we have known each other,  Keith and I have managed to sample a few varieties here in New York.  My favorite is still at La Esquina in Soho.  However, I am not above partaking in a cob at a local street fair; it hits the spot on a warm summer day and it costs quite a bit less.

So we were planning our Memorial Day cookout, and we thought that it was time for Keith to try his hand at this beloved corn of mine.  First, we looked all over town for cotija cheese.  No luck.  But we would not be deterred.  After careful consideration, we settled on parmesan, as it had the same tangy bite and texture as the cotija.  Keith created a delicious cilantro butter base, and we coated the corn in parmesan.

Now I, being the snotty New Yorker that I am, opted for a nice chunk of good Italian parmesan and insisted that we freshly grate it (as pictured below).

What we later realized (through some trial and error) is that our corn tastes better with that parmesan cheese in the green canister that may be in your refrigerator right now.  Somehow this "shaky cheese" (as Keith's kids refer to it) provides the most delectable, sweet yet salty bite that makes this corn so special.  Even a jaded New Yorker like me will admit when she is wrong.

A Mexican inspired grilled corn on the cob 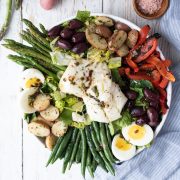